After having experienced a rather tumultuous week with college exams and an extra heavy workload, my son asked me this morning when it was that life gets easier. My answer: when we die. I suppose my reply was delivered tongue-in-cheek, yet to some degree it was anchored in the truth.

Truth. By simple definition it is that which is not a lie. It is the condition of moral loftiness that we aspire to, that we preach to our children, that we demand of our spouses. We're fed mythical tales of the lightness derived from a conscience cleared of the massive weight of dishonesty. What a grand plan, a most desired state of being. We want to buy some, in copious quantities. If only we knew where this oh-so-fine quality was on sale.

In this world the truths aren't always evident. At times they slip through the cracks of a carefully crafted false facade. Truth aligns itself with fact. There's a reason facts are often described as cold and hard. Inherently they are not bubble wrapped or designed with cushy corners. They are real. They have sharp pointy edges that scrape and draw blood. So it stands to reason that we hide from these facts, these truths as they present themselves. It makes sense to withdraw, to shrink back from the onslaught and pretend it all away. But what good does it serve?

The lies we tell ourselves are nearly as harmful as those delivered from the mouths of others - from the jaws of wolves dressed up as sheep who parade beside us grinning, coaxing our trust, and whom we smile at, and believe, because it's just so much easier. Right? It's less complicated to tell ourselves the marriage will work, the job is secure, love never dies, beauty never fades, time is on our side, life is fair, and the world is a safe place.  None of these statements are accurate or true. Not a single one. But they make for an easier existence. With these delusions in place we can hope to avoid the tumultuous. The disasters, the heartaches, the ugly. As a nation, we've seen more than a plateful of ugly lately. Personally, we've all seen it, too.

I don't propose these thoughts because I deem myself above the clamor. I've been burned by the fires of dishonesty, by the ruse of trust issued blindly. I've learned my lessons. Because a person hangs a shingle marked S. Claus and wears a bright red suit, that doesn't make them Santa. Duly noted. I don't wish to preach a sanctimony that I haven't earned. I am nothing but a student too. Still learning about this life and about character and truth and trust and tumult. 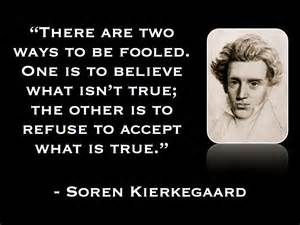