The Princess and The Pen

Yesterday there was a princess standing in front of our house. That's right. It was Dress-Up Day at the local elementary school, whose bus stop is only steps from our front door. I paused long enough to view the mini-firefighters, nurses, doctors and a veterinarian (stethoscope and toy kitty in her arms.) One mother informed me that the children had been instructed to dress as the person they wanted to be when they grew up. It gave me cause to wonder if there were any aspiring novelists in the bunch, and if so what outfit would they don to signify their choice?

Naturally the most obvious sprang to mind first. The little JKs, Sparks, Faulkners and Angelous. The would-be Kings and Christies. The up-and-coming Morrisons and Geisels, the pint-sized Plaths and Poes. Were they waiting there too, for their ride to school, running around in their pre-pubescent Garanimals? How would we recognize them, costume-less, armed with little more than their vivid imagination and their burgeoning love of words? 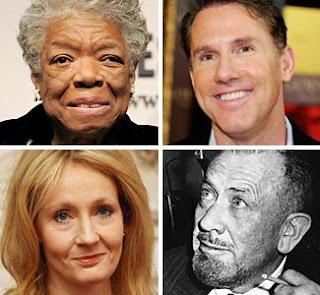 Writers aren't made, they are born - or so I'm told. They are sprung from the womb with untold verses locked inside just waiting to be sprung too. Most times, in their youth we hardly notice them. Often children aspire to the most obvious professions - those with packaging they can try on for a day and strut around in, like a helmet and bright red turn-out gear or a long white lab coat. We don't tend to pay any mind to that child with the pen. That kid hunched over a notebook with crayons and colored markers crafting a little story opening with "Once upon a time." 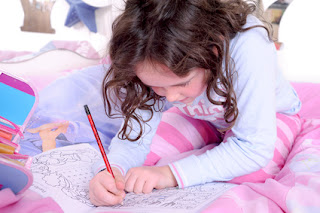 I was that kid.

If memory serves when I was forced to declare a grown-up identity I'd often reply, "teacher" or "stewardess"  or "mother" because they seemed easiest to understand. "Writer" was too obscure, too...unattainable? And the costumes pretty much sucked. I'd wanted to be a princess, too. (Little girls will never let that one go, will they?) In some ways I've achieved each of those things. I've learned so much in my journeys through the years, even though I may not have traveled all that far. I've subsequently taught my kids that which seemed most pressing to pass along and then some. And I've gotten much better acquainted with that notebook and pen.

The castle however...that might have to wait for another lifetime.
Posted by Louise at 1:21 PM