It may take 365 days to usher the calendar pages along, but I only need the minutes that hang in the balance between this year and next to consider the things that defined 2013 for me.

It was a year of givers and takers, movers and shakers. Of first tries and second chances. Of good news, bad news and no news. There were smiles of honesty and smirks of deceit. There were goodbyes and good-to-meet-yous, healthy gains and growing pains.

2013 was the year of The Word. Sentences were strung, dismantled and re-strung time and again. The Muse was mostly gracious, though ever unpredictable.

Change became the new constant. Novelty and nostalgia made for strange bedfellows.

There were resolutions kept and those quickly dismissed. Food, fun and games juxtaposed with exercise, work and more work.

Love dressed itself up and down to suit the seasons - tempted and tested, yet never absent.

2013 was more or less, more and less. It was every bit positive and negative. Hot and cold. Dark and light. Black and white.

I wish it all the best as it hurries off to that great Yin Yang in the sky. 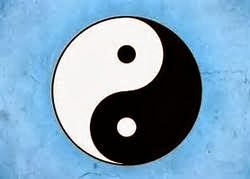 HAPPY NEW YEAR TO ALL!
Posted by Louise at 7:01 PM