She Spies Shells & More at the Seashore 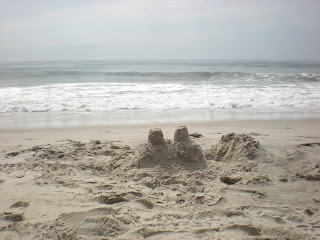 Just got back from a week down at the Jersey shore. R & R has never been more in order. And yet, I spent a good deal of that time "working" if you will - editing a manuscript and checking out the latest in beach reads. Hey somebody has to do it. I'm here to report that folks do more than build castles in the sand. They also actively consume their literature of choice under the bright, sunny skies while carefully re-applying the 15 or 30.

I saw a few Nooks and Kindles in hand but far more print copies, equal helpings of paperback and hardcover. Though it isn't polite to stare, particularly when the crowd is in various stages of undress - I did so anyway. I mean, what else are sunglasses for? It was all in the name of research (mostly - with the exception of one visitor with a six-pack of abs to die for...but I digress.) I wanted to see if I could determine which genre pulled in the most beach-readership. Magazines aside, and after much consideration the winner was: The Thriller. Won't Grisham, Patterson and Baldacci be, well...thrilled?

I confess I was expecting The Romance Novel to be a front runner. It wasn't. I noticed an equitable split of both men and women partaking in the written word, although the women were generally holding onto slightly less spine-tingling subject matter, the likes of Room, The Help, and Silver Girl.

Overall it was a perfect vacation - filled with plenty of family, food and festivities. And work, of course, can't forget about that. Though I must admit to feeling as if I could use a tad more time to complete my study. Perhaps another week or two? Can't fault a girl for trying...
Posted by Louise at 8:34 AM