Free to Be Buggy - Don't Lick After Dark 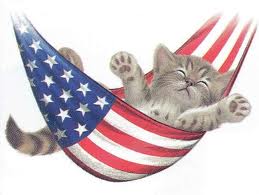 I remember like it was yesterday. The 4th of July when I ate a bug. And not just one - a whole damn bug family. It was shortly after the ice cream man came and went, bells jangling behind him. I'd ordered a vanilla soft serve in a sugar cone. The sun had retired leaving us younguns romping under the street lights. We ran around in the thick hot air infiltrated with those pesky winged critters that stuck to your sweaty neck, sucked your young blood, leaving itchy welts in their wake.

I didn't recall asking for chocolate sprinkles. Thought it was sweet of the ice cream man to elaborate. He probably figured I was a nice kid. Deserving. So I licked and played, licked and played. Ice cream melted down my arms but it was yummy, in an odd way. I licked some more until one of my sprinkles flew away.

This day also became known as the 4th of July I puked on my little sister. Twice.

Happy Independence Day, all. Relax, chill out. And whatever you do, don't lick after dark.
May freedom ring on!