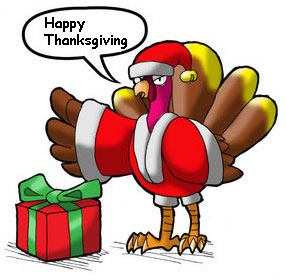 It isn't that I'm here with another gripe. I know y'all are about as tired of my fussiness as I am. This time I'm merely speculating with a teeny-tiny side dish of disdain. Okay, not that. More like wistfulness. I'm wistfully wondering what happened to Thanksgiving. In case you haven't noticed your turkey has a belly like a bowl full of jelly. Yes, yet another holiday is being hustled and hurried along to accommodate the spinning calendar  which suddenly seems to be super-charged in its rotation. Lately Xmas arrives in the stores hot on the heels of Halloween. The witches hats and bags of candy are stocked Klaustrophobically close to the candy canes and silver lanes aglow. If you're lucky, or if you happen to have your super-sonic X ray vision handy, you might spy an errant Cornucopia or a can of cranberry sauce, a sure sign that Thanksgiving is still around, if only sandwiched between the months a tad more snugly than it was before.
Don't get me wrong. It isn't that I don't like Christmas. In fact, I'm quite fond of it. It's more that I don't like the feeling of being rushed into things. Gives me the sensation that I'm late to a party I was just invited to. Can't a girl have a moment to throw together something decent to wear? Sheesh!
Consider me the voice of the turkey. Okay, on second thought, don't do that. What say I'm merely a proponent of all the holidays. I firmly believe they each deserve their 15 minutes of fame. Why should any of them have to share the spotlight? Santa is a jolly old soul. And we know he's Nice and not Naughty. He'd never knowingly steal the Turkey's thunder, now would he?
So what's the big deal, you ask? So what if St. Nick borrows some extra  limelight? There are worse things, right? Naturally. Still...
Perhaps I'm merely worried I'm falling under. This morning there are Christmas songs playing on the radio and yes, I'm listening. I'm debating decking the halls. It IS the hap - hap - happiest season of all. Isn't it?
Oh the pressure. I'm simply suggesting we slow down long enough to smell the gravy.
I suppose it's another one of those "if you can't beat 'em, you may as well join 'em" scenarios. Maybe it's more like "If you can't EAT 'em, join 'em."  After all it's impossible to ignore the fact that the star of this particular show usually ends up baking in a 350 degree oven for about four hours.
Ho-ho- Happy Thanksgiving all the same, gang! 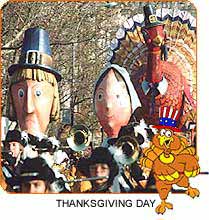