Stuck in a Good Book Hop

http://www.linkytools.com/basic_linky_include.aspx?id=206988
I'm especially excited with this giveaway hop since we get to highlight a book that was so amazing we just couldn't put it down. This was an easy choice for me! We at The Hook are celebrating Rebecca Hamilton's phenomenal hit: THE FOREVER GIRL. http://www.theforevergirl.com/ 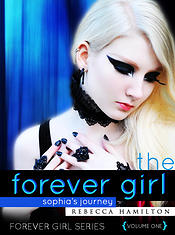 
Sophia's family has skeletons, but they aren't in their graves.
At twenty-two, practicing Wiccan Sophia Parsons is scratching out a living waiting tables in her Rocky Mountain hometown, a pariah after a string of unsolved murders with only one thing in common: her.
Sophia can imagine lots of ways to improve her life, but she'd settle for just getting rid of the buzzing noise in her head. When the spell she casts goes wrong, the static turns into voices. Her personal demons get company, and the newcomers are dangerous.
One of them is a man named Charles, who Sophia falls for despite her better judgment. He has connections that might help her unveil the mystery surrounding her ancestor's hanging, but she gets more than she bargains for when she finally decides to trust him.
Survival in his world, she learns, means not asking questions and staying out of the immortal council's way. It's a line she crossed long ago. If Sophia wants to survive the council and save the people she loves, she must accept who she is, perform dark magic, and fight to the death for her freedom.

"I was really drawn in by the writing from the first instance. The voice is clear and easy-to-read; it’s rare to see such natural flow and tempo from a debut author." ~ HarperCollins

“The Forever Girl” is an enticing read of Wiccan fiction, very much recommended reading.” ~Carl Logan of MIDWEST BOOK REVIEW

This smartly written, expertly paced, thrill-ride captivated me from the first page. And for those of us who are craving more - well, we won't be craving long. This is part of a series by the same name! Please visit Rebecca's website above for the exciting details.

I'm super happy that my upcoming novel, THE MAKING OF NEBRASKA BROWN is also being released by Immortal Ink Publishing, the same press that brought THE FOREVER GIRL series to its loyal readership! Rebecca has kindly donated 3 eBooks for our hop giveaway. Just enter the Rafflecopter below (see more.) In addition you could win a $10.00 Amazon e gift card by entering the Trailer Release Party below. So many chances to win in one place :)

Thanks to Stuck In Books for bringing this hop to life! Be sure to keep on hopping! http://stuckinbooks.com/
a Rafflecopter giveaway
Posted by Louise at 9:09 PM