The Mystery of The Writer - Demystified.

Let's say you've just finished indulging in your favorite meal. You're full. You're satisfied. Momentarily content. A half an hour passes and suddenly you find yourself hungry again. And not just any run-of-the-mill hunger. You're damn famished. No, you didn't just eat Chinese and no, you don't have a tapeworm. What you have, my dear, is something far more exasperating. You have the analogy of The Writer. The blueprint behind why he/she does what he/she does.

Most Writers write because they simply cannot stop themselves. It is a need that can't and/or won't be avoided or effectively ignored. Not for any decent stretch of time, anyway. It is the bottomless pit, the itch incapable of scratching. The relentless void of a calling that is destined to remain unrequited.

Recently my fellow writer friends and I have been talking about what drives us toward a face-off with the blank page. What it is that nudges us to carve a story out of a raw chunk of words. And we have collectively agreed that we are among a mutated mass of individuals, zombie-like in our demeanor, following the dictates of a craft we admittedly both love and hate. We neither devise nor edit the rules. We swallow frustration like it's cold well water and we've gone days without a sip. We suffer rejection, criticism and disappointment like nobodies business. We are the Rocky Balboa's of the literary landscape. All together now - ADRIAN!

The typical writer is born, not made. He is easily recognizable - the infant behind the nursery glass clutching a tiny notepad and pen. As he grows, The Writer can often be spotted sitting on the sidelines curbed or benched while his adolescent peers are indulging in a healthy game of sport. That far-off look in his eye isn't the manifestation of depression. Nope. The Writer is actually plotting a scene or making friends with a brand new character appearing inside his head. Madness, you say? Perhaps, but it cannot be soothed. And sometimes even The Writer himself doesn't see it happening until its too late. He may miss or dismiss the signs. He assumes that it's completely normal to read a book while simultaneously re-writing the passages. Doesn't everybody do that? He has yet to understand. He did not come to this earth as one of its civilians.

An idyllic life awaits those not remanded to becoming the future word jockeys. So what becomes of them? What fate is in store for The Writer whose brain doesn't cease manipulating monologues and crafting colloquial catchphrases? He will be join the brother and sisterhood of the Writership. And he will do what he was conceived to do. God help him. God help us all.

Listen to the very wise words of a friend and fellow Writer, Krista Krueger, http://kompletelykrista.wordpress.com/2013/07/18/why-i-started-writing/ as she so perfectly describes the plight of the wordsmith.  "Most of us can’t just write.  We do it when our families are sleeping, in the dark of night and the blue beginning of the day.  We do it at work instead of eating.  We do it as the pile of laundry grows around us.  We do it because we love it, are obsessed with it and devoted to the art of creating our own worlds and characters that become real to us."

So there you have it. The jig is up. A Writer is as a Writer does. Or maybe it's the other way around. A Writer does as a Writer IS. Have pity if you will, but whatever you do keep quiet about it. The Writer works best in complete silence. You're welcome. 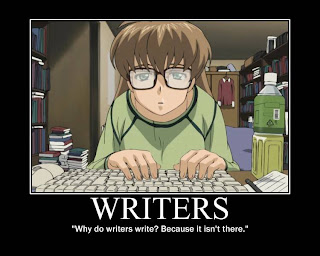